I consider myself a traveler so I don’t always enjoy being a tourist, I sometimes arrive in some places "do the job" and I'm glad when I'm back on the road. I'm also not a cyclist, I didn't even like cycling before this trip, I'm just a regular guy who's travelling by bike, but if someone asks me what is the most fascinating part of my trip I don't need much time to answer: meeting people! 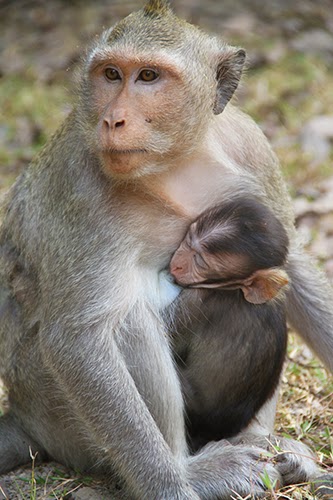 I got to enjoy riding my bike, I'm glad of all the amazing places I've been to but since the beginning of this trip meeting people is the thing that has given me the most pleasure. And so far I can say I've met some amazing people. I can’t write about all of them here, but for sure they are an important theme in this story I'm living.

I was already in Cambodia, not so far from the border when I stopped at a barber’s shop to get rid of my beard, when a cyclist couple came by. I'm always glad to talk with people who are also traveling by bike, but what I didn't know when I saw them was that I'd be even happier because of that meeting, they were also Brazilians and had stopped because they saw the flag on my bike.

We talked for a long time, laughed a lot, shared our stories and the plans we have for our trips, and exchanged some tips since they were going to Thailand and I was coming from Thailand and heading to where they were coming from. They not only gave me tips for Cambodia but completely changed the route of my trip. And as a result of that change I can say that Cambodia and Vietnam are no longer the last places I'll be visiting in the weeks I have left in Asia. 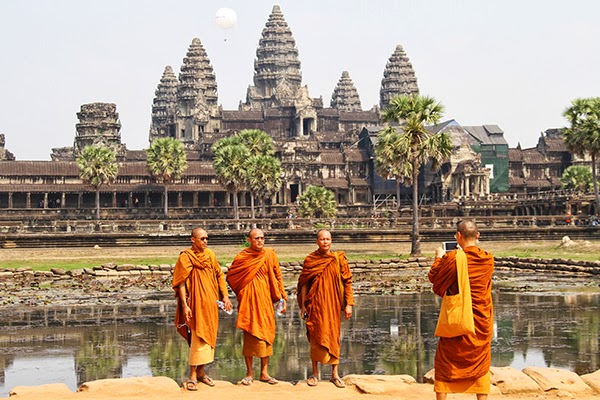 Two days later I reached Siem Reap, When I got there I couldn’t find a CouchSurfing host in the city but I had the address of a church I had seen online, so I cycled to the church and the Korean pastor told me that the only thing he could do was allow me to camp in the church yard. For me that was fine, I could leave my things safely, had a place to have shower and even Wi-Fi, what could be better? 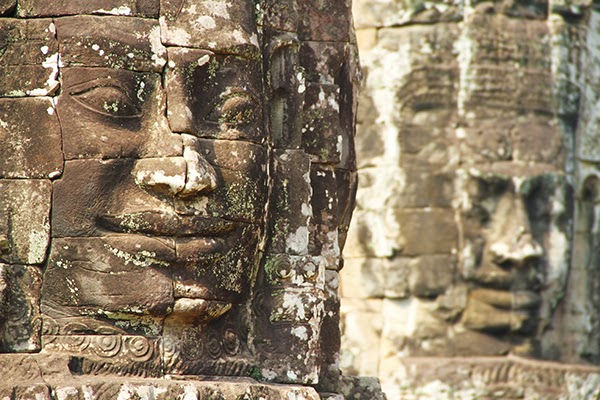 During the next three days I visited the Angkor Wat, the heart and soul of Cambodia. The temple complex, the largest religious monument in the world, is a national symbol appearing even on the Cambodia flag. This is one of the most important archaeological sites in South-East Asia, and it was named by UNESCO as a World Heritage site in 1992. On the last day I got there at 05:15am to see the sunrise, I thought it was a bit early but was impressed when I saw the crowd that was already there with their cameras and tripods ready. 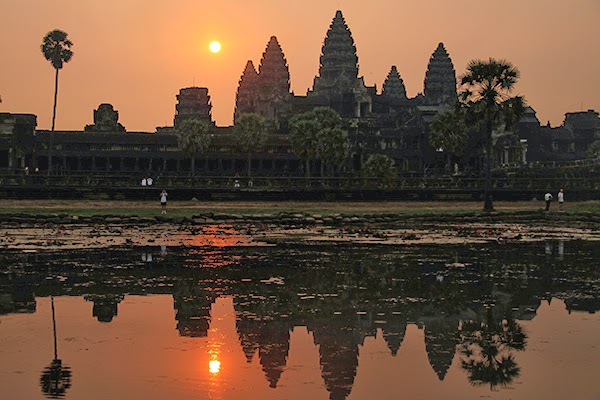 Cambodian people are very kind and friendly but what really upset me here is how overcharging foreigners is part of their culture. Since Cambodia is a poor country tourism plays an important role in the economy, so the general idea is that “rich tourists” shouldn't complain about being overcharged.

Well I'm not a member of that club so I was always upset when that happened. I remember one day stopping in a place to buy water (that I already knew the right price) and asked the price of a bar of soap, the lady said 10.000, I had no idea whether it was expensive or not but since I'd be reaching a big city soon I decided I'd find a bigger supermarket and buy it there. So I was leaving the place when the lady said: did I say 10.000? I wanted to say 1.000! I smiled wryly and managed to control myself by not showing her the middle finger. 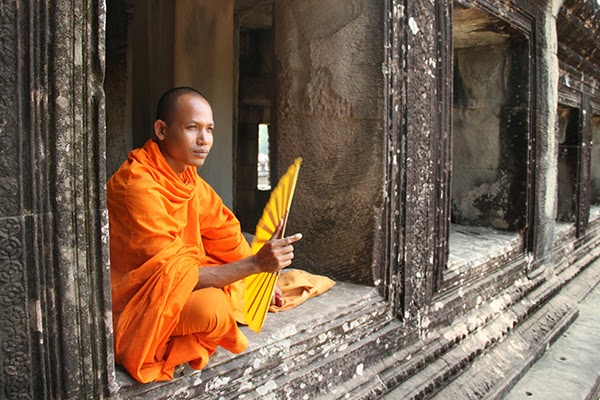 But children were the compensation in all of this, everywhere it was very nice hearing their greetings. I sometimes didn't know from where the "hello" or "bye bye" was coming from but I waved anyway and to both sides.

The road leading to Phnom Penh was sometimes in very bad condition, with long stretches without asphalt and endlessly dusty. When I arrived in Phnom Penh I was sure that my bike and I had never being so dirty during this trip.

I also didn't find any CouchSurfing host in Phnom Penh, but before arriving in the city I checked online and saw that there were many international churches there, so I sent an e-mail to a pastor hoping that they had a place for me or would also allow me to camp in the church yard. The pastor forwarded the e-mail to a few people and one person replied saying I could stay at his home. 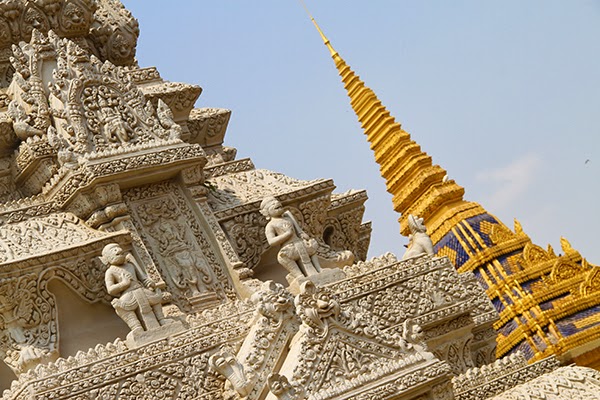 He was an American missionary and has been living and working in Cambodia for almost 30 years, he sold his car a few years ago and since then has been getting around the city only by bike. That was again another great person I met on this trip, he not only gave me a place to sleep but received me as a member of his family. Although he was very busy he took the time to cycle with me around the city and even guide me around the museum. How could I pay back such kindness and hospitality?

In Phnom Penh I learned more about the tragic recent history of Cambodia; among the places I visited was the Tuol Sleng Genocide Museum, the former S-21 prison. A high School complex that was turned into a prison and a torture center during the dark days of the Khmer Rouge regime. 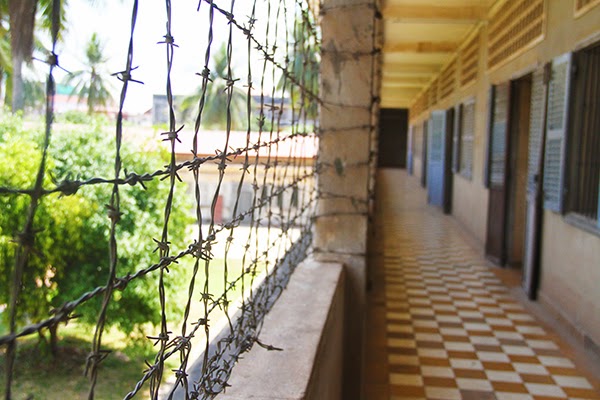 The Khmer Rouge regime led by the fanatic, Pol Pot, not only destroyed Cambodia in the 70s but kept the country in a state of war from the time the regime collapsed in 1979 until Pol Pot’s death in 1998.

15 km southeast Phnom Penh I visited Choeung Ek, the most well known of over 300 killing fields throughout Cambodia during that time. About 20.000 were killed there, from a total of an estimated three million people (25% of the population) that lost their lives through execution, starvation or disease. And all of that because of hatred, ignorance and fear of a cruel person and his false cause.

A very sad chapter of Cambodia history that still has implications for the present. Cambodia has still a long way to go in order to give its people the life they deserve, but what is encouraging are the words of my friend, whose experience, along with many others NGOs working in the country, is that life here is getting better each year.

From Phnom Penh I cycled to Bavet, sleeping a night at a Buddhist temple and camping the other days. From here I’ll cross to Vietnam. My original plan was to spend more time in Cambodia cycling as far as the south, but since Vietnam won’t be my last stop in Asia I had to shorten my route in both countries in order to cover more distance in the time I have left.

So it’s time to speed up! 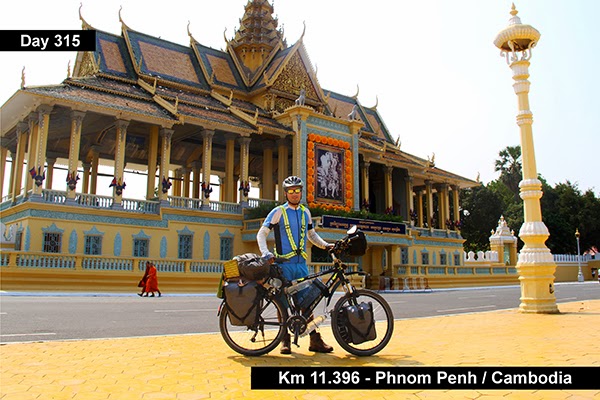