I've already been to many countries and seen so many different cultures during this journey, but the feeling I had before coming to India was that it would be like starting afresh, and it really was! 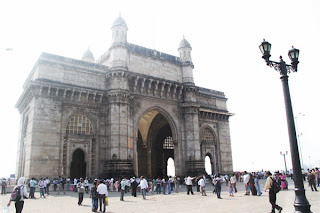 The unknown always brings with it certain concerns or things to be scared of. I can't say I was afraid to come to India, but I must say I was a bit concerned about what I would actually be facing here, something so different from everything I'd seen before.

Fortunately, I can say that it has surprised me in a positive way. I was already prepared to see the poverty, social injustices and dirtiness (and it is everywhere) but what I didn't expect was that Indian people would make me feel so welcome and at ease while cycling in their country and that I would be so amazed by their rich culture. 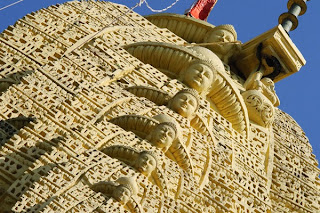 The flight from Cairo to Mumbai took 5 hours. At the airport in Mumbai I had a Facebook friend waiting for me, who hosted me for a few days. I normally meet people while on my journey, that add me to Facebook afterwards. This was the first time it happened the other way round and the first time I met a virtual friend.

This friend was an enthusiastic cyclist who had started following my adventure from the point in Italy when I met that South Korean guy who was also travelling the world by bike (whom he had also met in India). I contacted him and he was pleased to receive me. 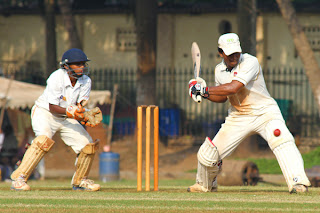 What shocked me at the airport was the heat. I was expecting, if not a cold, at least a cooler India, but the cool season hadn't yet arrived, and with the high humidity of Mumbai I felt as if I was in Brazil. Outside the airport, before I had even finished reassembling my bike, my T-shirt was completely soaked with sweat.

Among other places I visited in Mumbai was the Taj Mahal Palace Hotel, scenario of the 2008 terrorist attacks that took the life of 166 people. Nowadays heavily protected.

Three days after arriving in Mumbai I started heading north, it would take 4 weeks and around 1.600 kms to reach the capital, New Delhi. 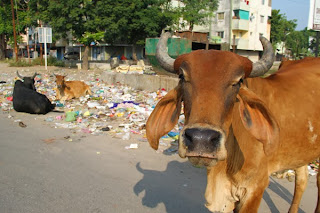 My main problem in India was adapting to the chaotic traffic, and what made things even worse was having to cycle on the left. In India, traffic drives on the left, as in Britain, and the cars have their steering wheel on the right.

But, of course, whenever I saw a local village driver entering the highway from the wrong direction, my first reaction was always that he was right and everyone else wrong, until I got used to it (and to the many bad drivers). 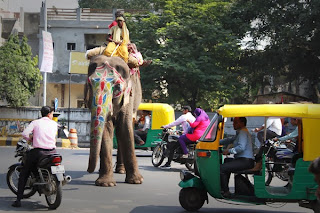 Something I never got used to and which drove me crazy during those weeks was how much they blow their horns. Drivers blow their horns at everyone and everything; it's like a self-defence gun. On the three-lane highway it’s more peaceful, but in the cities or when there is a bigger flow of trucks, your ears don’t get even 15 seconds of silence.

The National Highway 8 (NH8), which connects Mumbai to Delhi, was my living room for those past weeks. It was the place where every single day many people, very surprised and curious about my bicycle, drove alongside me asking questions or stopped for a picture. Indian people like foreigners very much and even more if you come with a crazy "bike-house". They are pleased to show their affection and sympathy. And, of course, there is nothing better than this warm contact when one travels alone. 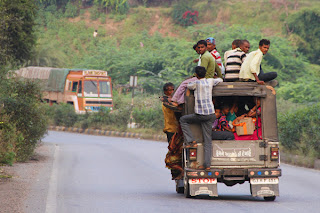 I got used to seeing their surprised faces, while greeting me on the road or when I cycled through a city. Stopping the bike in front a shop or supermarket was always an event, with a lot of people surrounding my bike, wide-eyed. In other countries it would be two or three children; but not in India. Here the adults were the first ones to arrive. One day I entered a place to buy water (here it's recommended to drink only mineral water) and when I came out, 5 minutes later, I couldn't see my bike. It was completely hidden amongst a crowd of people. That day I counted 33 people around my bike, all men and boys. 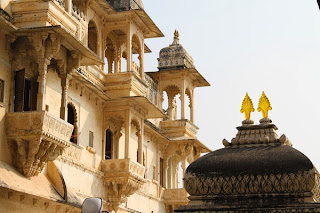 The fact that I was from Brazil didn't matter much. Here the word "Brazil" doesn't have the same effect as in other countries, since Indians don't like soccer very much. They hardly ever recognize my Brazilian flag, and don't know much about Brazil. Cricket is the national passion, and the country is one of the best, if not the best, in the sport.

I suffered somewhat with supplies and finding a supermarket was my eternal mission, I had to content myself with what I could find in the small grocery stores of the villages along the highway. And even though they were cheap, eating in restaurants was almost always out of the question; on the road there were only vegetarian restaurants and everything was always very spicy. Once I arrived in a big city I ate my fill. Even a McDonald's you start calling home. 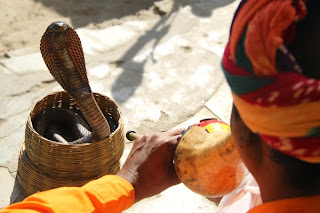 I left the NH8 only to visit some interesting cities on my way. First was Ahmadabad. Gandhi's house, the place where the "Father of the Nation" lived, is today a museum on a huge compound, with a lot of trees and squirrels. There one can learn more about this great man, who led India to independence from British rule in a pacifist revolution.

In Udaipur I visited the City Palace, a magnificent palace from the 16th century, surmounted by balconies, towers and cupolas. It dated from the time that Udaipur was the capital of the kingdom of Mewar. 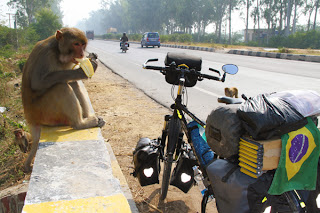 I had been cycling for two weeks, having stopped only one day to rest and the muscles in my legs were getting tired, when I saw from the road a Catholic institution, Missionaries of Charity, the order of Mother Teresa of Calcutta. I stopped there and the very nice sisters hosted me for a few days, treating me very well, so I had the much-needed rest. The place was home to dozens of disabled people treated by these followers of Madre Tereza.

Arriving in Jaipur I had a nice hotel room waiting for me, and what was even nicer: for free! The owner had stopped me on the road a week before. Learning that I'd pass through his city, he told me that my tent could have a day off. 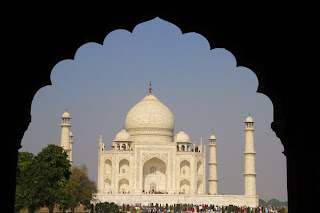 After visiting Jaipur I headed to Agra, leaving the NH8 for the NH2, in Agra I visited the most famous monument in India: the Taj Mahal, the amazing building or "the most beautiful building in the world" delights every visitor, not only because of its fascinating architecture but also because of the great story behind it. Built by emperor Shah Jahan to honor the memory of his beloved wife, Mumtaz Mahal, the mausoleum today houses both their remains.

The Taj Mahal was the last great place I had planned to see on this journey, I plan to spend a few more months on the road, but the "work" is done. What comes from now on will be a bonus. 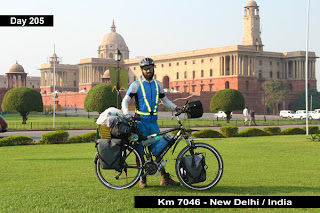 Three days after leaving Agra I got to New Delhi, and was immediately fascinated by its well- planned and green avenues - a heritage from British times – which were in sharp contrast with other parts of the city.


In Delhi the Catholic church hosted me for a few days and now I'm staying with CouchSurfing friends, a wonderful family. Until now I've only cycled in the city, and have not had time to visit places, I'm dealing with issues concerning my trip and preparations to head north to the mountains in the coming days, but I plan to be back in Delhi for Christmas.