When I left New Delhi for the mountains my plan was to cycle to Daramshala, visit any other place in the region and come back to New Delhi for Christmas, but this trip has a life of its own, so things don’t always go as planned. 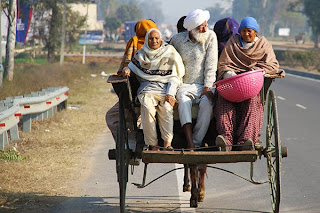 300 km from New Delhi I had a problem with the bike, the wheel rim broke and there was no way it could be repaired, I had to have a new one. Fortunately, the day before, I had left the city of Chandigarh quite late, so I was only 40 kms away, and it was the only place I would be able to find a new rim, If I couldn't find it there I would have to go back to New Delhi.

Fortunately there was a big bike shop in the city and that saved the day. The bike would still have minor problems in the mountains but manageable. 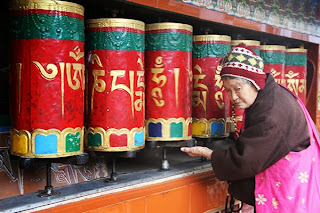 By the time I arrived in Daramshala my plans had already changed, it took much longer than I had expected to get there, due to the hilly area, and also to the delay caused by having the bike repaired, so being back in New Delhi for Christmas was no longer an option, I would have had to cycle quickly through the region and wouldn't have enjoyed it in the way I wanted. So I decided to take the time I needed to really enjoy that amazing landscape and then to find a place to spend Christmas there. 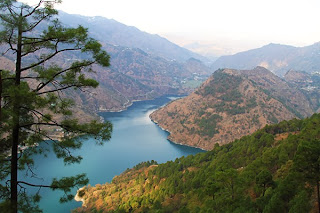 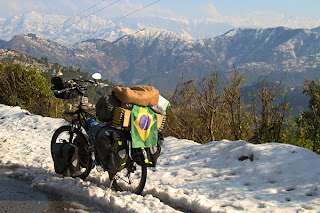 Leaving Daramshala I headed to Chamba, next to the Himalayas. The whole region has a magnificent beauty, and even though it was sometimes very tough to cycle in that terrain, the amazing landscape always paid off.

People were always very kind, it was always easy to find a place to stay, even when I was expecting to camp, I ended up sleeping at a monastery, church, school, temple or with local people. 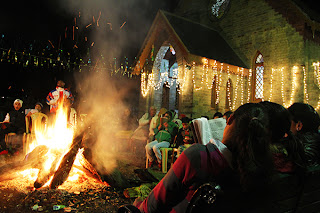 I arrived in Chamba in the afternoon of December 24th, and straight away went to find the only Christian church in the city. They were busy preparing for Christmas, but received me very well. There I had a very special Christmas with people gathering together around a big bonfire at night and the celebrations in the church service on Christmas day.

Heading back to New Delhi I stopped in Amritsar, where I spent New Year's Eve and the day after went to visit the Golden Temple, the most sacred place of worship for Sikhs.

Once back in New Delhi it was time to really be a tourist. During my first stay in New Delhi I was very busy, dealing with the bike, visas and other issues. This time I also had things to do (it's always like that) but had more time to enjoy and visit some of the many attractions. 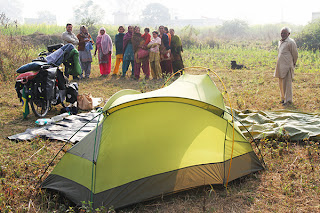 Among the places I visited is the Lotus Temple, a Bahá'í House of Worship. The fascinating design of the building is inspired by the lotus, a beautiful flower and a symbol of purity.

But what surprised me the most was the Akshardham, a Hindu temple complex, a display of Hindu and Indian culture. The temple itself left me speechless because of its beauty and amazing architecture. It's built of pink stones and white marble with thousands of sculpted figures, many of them being elephants, everything with detailed finishing. Every two meters I had to stop to contemplate such amazing pieces of art put together by more than 7.000 artisans.

The complex is huge with a lot to see, and with their message conveyed in a very sophisticated way, through films, light and sound shows with robotic figures, and a spectacular boat ride through 10.000 years of Indian culture. Wonderful!

I can say for sure that this was the place that most fascinated me, not only in India, but since the beginning of this journey. My only complaint was not being able to enter with my camera.

This time I didn't cycle much through the city but used the metro almost every day. The metro system is something new in Delhi. It has existed only 10 years but has revolutionized the public transport system. Due to the terrorism threat, all metro stations in New Delhi are heavily protected, with passengers having to go through metal detectors and X-ray baggage inspection.

Last time I stayed a few days in a church and with a CouchSurfing family, wonderful people that helped me a lot and whom I visited again. And this time I stayed with very nice CouchSurfing guys, who hosted me for a week. They were also hosting other CouchSurfers from other countries. With all the parties and visits that they received, I had contact with people of 11 different nationalities.

The place was so nice that it had to have a name so I named it "Casa Louca" Portuguese for "Crazy House", which they loved! They said they would make some souvenirs to give to their guests as a memento of their stay in the "Casa Louca". To my great surprise, one day later they’d already had it done, and for me, who had named their house, they’d made a special one. I couldn't like those guys even more! Where can you find hosts like that? 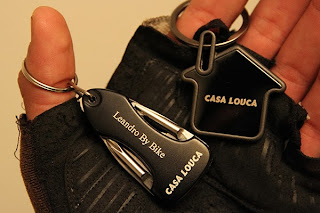 Now I'm already back on the road heading to Kolkata, on the third and last stage of my cycling trip in India. Feeling already at home and at the same time constantly surprised by the things I see every day.
Great India!