Ho Chi Minh City was my first stop after entering Vietnam. The city once called Saigon, was the capital of South Vietnam and had its name changed when the war was over and the country was reunified. 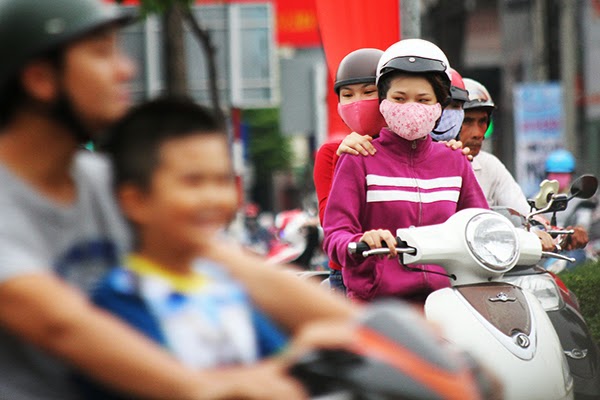 I got there in the rush hour and was totally amazed by the number of motorcycles. I had heard about the motorcycles, but since I had already seen a lot in India, Thailand and Cambodia I didn’t think it would be much different, but I was wrong!

There was a sea of motorcycles, they were everywhere and in their hundreds. Stopping at the traffic light there was no way that my bike and I would not draw attention, we were a foreign body in that sea. Ho Chi Minh City is the largest city in Vietnam, and it really surprised me as I wasn't expecting to see such a modern city. There I had a CouchSurfing host, she was an English teacher now teaching in Vietnam. Together we visited the Cu Chi tunnels, the network of tunnels used by the Viet Cong during the war of Vietnam, or as it’s called here, the America war.

Another nice person I met in the city was a Vietnamese guy who had been following my trip since last year. When I said I was coming to Vietnam he contacted me and we agreed to meet up, we had lunch together and it was nice. That was the second time I met a virtual friend during this trip. 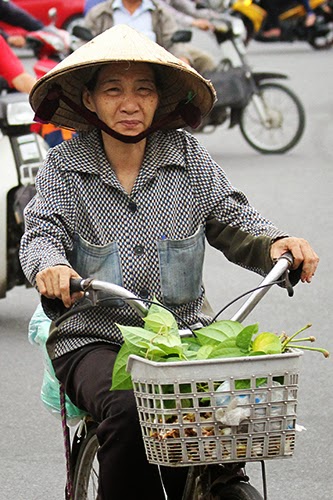 Heading north I was sure I would always find a place to sleep since there were many churches by the road, but this wasn't the case, since Vietnam is still a communist country, the government wants to keep an eye on foreigners, so wherever you sleep, at a hotel or a friend’s home, you must be registered with the police.

So I ended up using my own hotel most of the time, but was lucky enough to find some churches on the way that provided me with a place to sleep, I don’t know whether they didn't know the rules or whether  the desire to help came first.

I met many travelers on the road traveling by motorcycle. Something very popular among the backpackers in Vietnam is to buy a motorcycle, ride from Ho Chi Minh City to the capital Hanoi, and then sell it there. 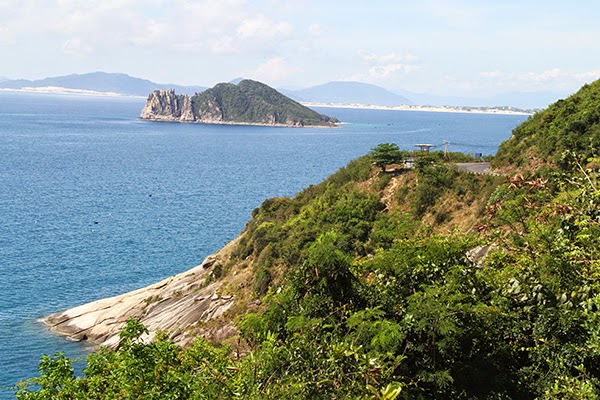 I also met a few bike travelers. One day as I was cycling, a cyclist couple caught up with me, so we continued cycling together for a while. The man asked where I was from, when I said Brazil he started speaking Portuguese and said: If you want we can speak Portuguese! Wow that was a surprise, in the Vietnamese countryside I had found someone who could speak Portuguese.

I asked where they were from and when he said Holland it was my turn to surprise him, I started to speak Dutch and said: if you want we can also speak Dutch! We both laughed. Nice road meetings! 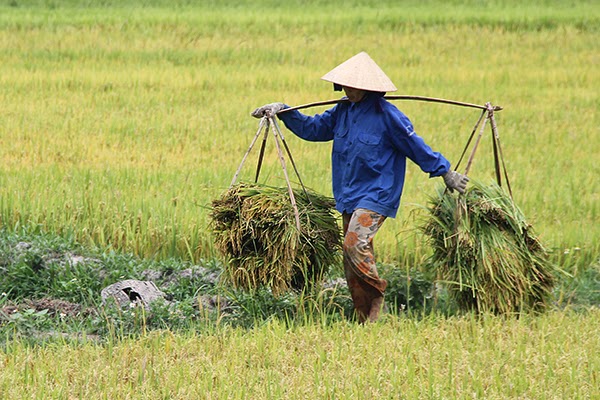 I stopped to visit and rest in Nha Trang, Hoi An and Hue. In the big cities there was no chance to have a place to sleep in the churches, they were always very concerned about the police. So I used to leave my bike and things at a church during the day and pick it up and go to find a place to camp in the evening.

It was impossible not to enjoy the landscape along the way, endless green fields of rice. Once I took the opportunity to stop my bike and enter the field, walking around with local people who were harvesting.

Vietnam ended up being the only country where I didn’t visit the capital. My original plan was to cycle as far as Hanoi but since I had changed my route and decided to visit Laos as well and to end in China, I could cycle only half of the country. From Hue I started heading to the border and crossed to Laos at Lao Bảo. 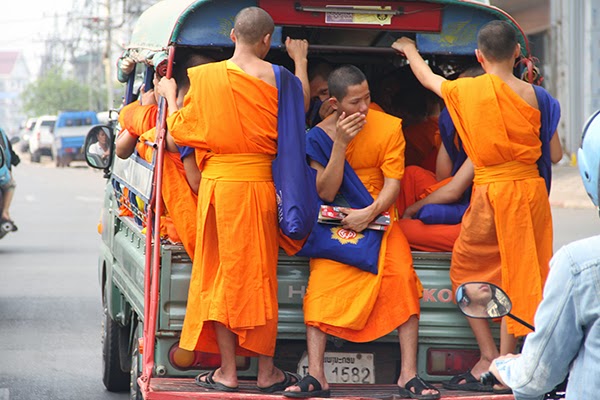 I arrived in Laos on the third and last day of the festival of Lao New Year, and couldn't avoid being welcomed by water on the road; people throw water at each other as part of the celebration.

When I entered the country I had some trouble with money. I was sure it wouldn't be difficult to find a place to exchange money after crossing the border, but in contrast to other countries, there was no city at the border. It took me two days to see the first ATM and find a bank that could help me.

Laos is a place where life still goes on very slowly, 70% of the population live in the rural areas and even the capital, Vientiane has retained some traces of a small town. Internet is only in the big cities, asking in a restaurant if they had Wi-Fi always sounded like a joke. 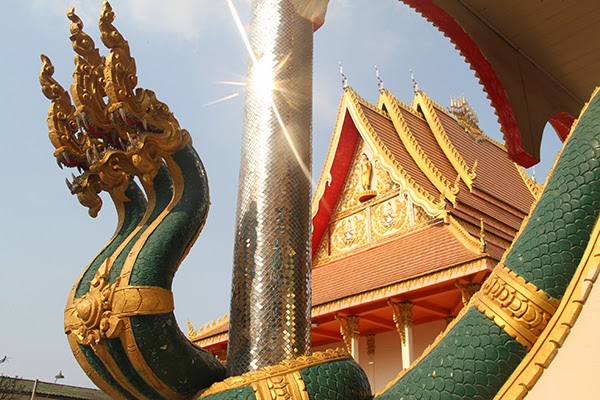 The country is the most heavily bombed country in history. During the Vietnam War the United States dropped more bombs in Laos than all the bombs dropped during the World War II combined, there still being an endless number of unexploded artefacts that from time to time claim someone as their victim. That was always a concern of mine, I always tryed not to camp far from the road.

Confronted with consistently hot days, it took me more than a week to reach Vientiane,

In Vientiane I took time to rest, go sightseeing and to go about my principal mission in the city: to get my Chinese visa. I had read online how hard it could be to get a Chinese visa, and that even if you managed to get all the required paperwork they could still make your life difficult if they wanted to. 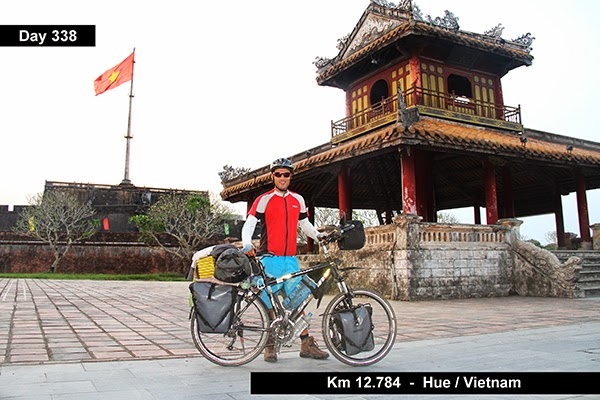 My idea was to apply for the visa in Vientiane and, in the event that it was denied, to go by bus to Hanoi or Bangkok to try again. But fortunately everything went well. A tourist agency made the flight and hotel bookings (cancelled afterwards) for me and with the papers I had I went to the embassy. I didn't have everything that was asked for on the internet, but the guy checked the papers I had, gave me a form to fill in and when I was ready he took everything and gave a paper with which to pay. Three days later I had my visa. As simple as that! 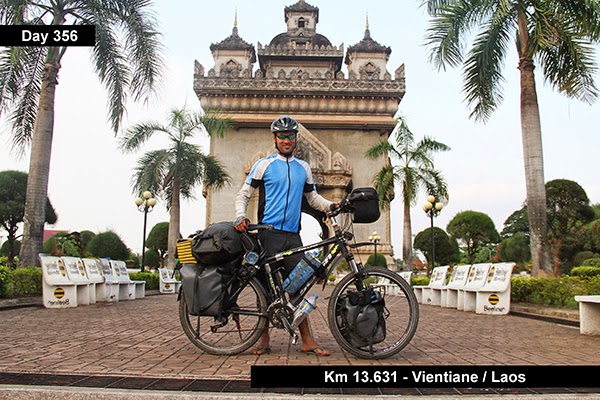 Even though the northern part of Laos is amazing with great landscape, I decided I wouldn't face its very tough hilly area, so I took a bus from Vientiane to Luang Nathan, the distance was about 700 km but due to the hilly area and bad road conditions it took 23 hours to cover.

From Luang Nathan I cycled the last 55 km to the border and from Boten I crossed to China, my final destination in Asia and probably my last stop before heading home.

So China, here we are!